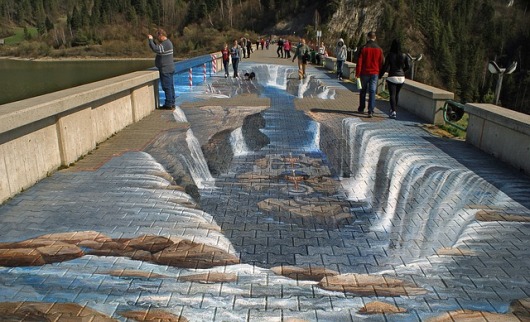 The images of story tell the tales and mark the trails of story’s propelling journey. These images provide the land marks, the physical locations, the characters’ identities and the desired destination of story’s unfolding. They too spark listeners and ignite tellers in their perceptually engaging, delightfully entertaining duck-if-you-need-to; scream-if-you-want-to; laugh-if-you-have-to interactive moments story’s story-line.

While embarrassing the interactive power of story’s vivid images, one may wonder. One might even ask. Is what I thought was suppose to be happening or really what is happening?

In the Three Little Pigs, did the first pig really build his house out of straw? Or, due to the latest straw embargo, the first little pig was found sniffing around town in search of alternative building supplies. In a moment of un-flatulated wind, a scent crosses his snout. Trotting to the corner of 124th Ave and Huff-Stop Lane, stuffed behind a local dinner, he discovers mounds of discarded onion peels.

What is the real story behind the Three Billy Goat Gruffs? . . . A local press conference reveals numerous accusations and county-wide concerns regarding cases of reported goat-guzzling trolls and troll-butting goats. County officials, recently investigated for lacing city officials grass seed with Witchatill’s Weed Cropping Organic Seedlings, presents an unprecedented, legislative proposal. If signed into law, the proposal will ban all goat-guzzling and troll-butting. Henceforth, all goats will be required to remain on their side of the bridge. County official have also announced their generous donation of Witchatill’s Cropping of Organic Seedlings to replenish the goat’s previously eaten food supply.

Until next time . . . Let Your Storyographer’s Journey Continue!